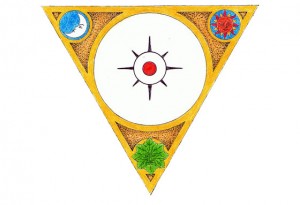 Beginning with a like-minded friendship that has now endured for nearly fifty years, a small gathering has ebbed and flowed over time, following the pathways and teachings of Druidism, Paganism and Taoism, as well as the sciences of Astronomy, Geology and Biology!

We also have a keen interest in Archaeology, Megalithic Astronomy and Ancient History!

Over the years we have travelled and spent time living and camping in Woodlands as well as many other places including the Welsh mountains and Valleys, we have undertaken pilgrimages to important and interesting ancient sites and landmarks, we have also experienced a wide variety of retreats and celebrations, both as part of groups and individually, learning to work with the Earth, Nature and the Inner Self!

The Sunwheel Grove started life as a pilgrimage to Wayland’s Smithy and Avebury before becoming an annual event for Summer Solstice!

Starting from our local stone circle, the Rollright Stones, we cycled as the crow flies along old B roads and ancient trackways, through Burford, Carterton and Faringdon, picking up the Ridgeway at Uffington White Horse Hill and following it to Avebury.

The initial foundation stone of the Sunwheel Grove Druid Order was laid with the advent of our original journey of Pilgrimage, when our arrival at Avebury, on the evening of Tuesday the 16th of September 1997, coincided perfectly with a spectacular Lunar Eclipse and really was an incredibly special welcome!

Over the years we have explored Avebury and the Ridgeway’s rich history and gathered with friends and other Pagan groups such as Wiccans and Odinists as well as Shamans and Druids to name but a few.

Stepping into the early 2000’s we began our spiritual transformation, and the foundation of the Sunwheel Grove Druid Order came into being. For years we celebrated Ceremony in ancient woodland and a multitude of personal and sacred sites, all the while looking for a suitable site to establish the roots of our Grove, we finally found our home in the Spring of 2008, when the construction of our Grove began.

The layout of our Ceremonial Year and the Sun-wheel cycle is governed by the creation of The Sunwheel Calendar which was originally drawn up in the mid 1990’s and has given us our fixed dates and structure up until the present day!

Here within the sacred circle of the Sunwheel Grove, we believe that life and the energy of all existence, is brought into being with the foundation of the Triad – The Sun, The Moon and The Earth and the relationship between them and one another!

Imbolc, Beltane, Lughnasadh and Samhain – Spring Equinox, Summer Solstice, Autumn Equinox and Winter Solstice which is celebrated in two parts – The Ceremony of Sunset and the Ceremony of Re-birth!

As the settlement of our Grove is now rolling on towards a decade, we are reminded of our early days and how we found it hard for friends and like-minded people to find a local group or Order to contact with a view to an introduction, guidance or even joining for celebration and Ceremony!

This is particularly difficult if you are either new to these gatherings, re-defining your personal beliefs or you have been practicing as a single person and are looking to expand and become part of a collective!

In the future, we are hoping to expand our newly updated Website to encourage interested parties to get in touch with us, whether you are a group of friends who need help with structuring your gatherings to include Ceremony and its layout or a couple of people that would like to honour and celebrate together!

We would like to encourage people to organise and form their own gatherings, eventually with their own sister Groves to become part of a network, we will be in a position to share our experiences of building a Grove and help with Ceremonial layout and scripts!

Our Ceremonies cater for different group sizes – we have a ‘North & South’ Ceremony for 2 participants – which run for about three quarters of an hour - to an hour!

For bigger gatherings we have a ‘Full’ Ceremony which is designed for 3 – 9 participants – which run for about an hour - to an hour and a half!

These Ceremonies are written specifically by and for the Sunwheel Grove and can be used in full or adapted by you to suit your own needs!

We really like the idea of having local Groves, for friends and local interested parties where they are accessible, to work with your own locality – either in a quiet local spot or a garden or site of your own choosing – you could start with various quiet places as we did and in time you can evolve and hopefully find a permanent home for your Grove as your gathering grows.

This could lead to the possibility of offshoot projects working with Woodland, Nature and other conservation and environmental ideas!

We are also hoping to organise a Summer Camp so that we can all meet up and celebrate together, depending on your location, if you are abroad, you could arrange your own!

Hawk Elderin and Morien Ravenstone
on behalf of The Sunwheel Grove Druid Order!

↑
Translate »
Sunwheel Grove Druid Order
We use cookies to ensure that we give you the best experience on our website. If you continue to use this site we will assume that you are happy with it.OKRead more