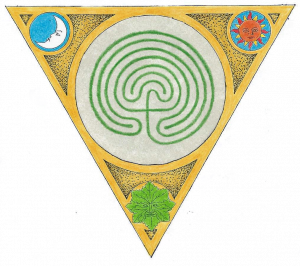 Unlike the Maze, which began to appear around six hundred or so years ago in medieval gardens and grand estates, the origins of the Labyrinth and their design and creation, reach much further back into the history of man for more than 4ooo years, and is often shrouded in myth and legend, in connection with many diverse cultures throughout the world, including the Ancient Greeks and the Romans.

As a design, the Labyrinth was first carved into wood, stone, and adorned pottery in the Bronze Age Neolithic period and could be followed with the tip of the finger. In time the Labyrinth began to expand and take its form marked out upon the ground and took on a whole new significance to a wide and diverse community.

Labyrinths were often marked or cut into the turf of Village Greens or local fields where they could be of access to everyone.

In the Middle Ages even the Church adopted the Labyrinth and introduced them to the entrances of Cathedrals, and examples can still be found today!

Unlike the Maze, with its multitude of twists, turns and dead ends designed to confuse, the Labyrinth is a single path, a single focus to follow toward the centre before continuing the pathway out of the Labyrinth!

Through the ages, journeying the Labyrinth has been seen as a calming, relaxing and meditative experience and it is said that, to walk the Maze is to lose oneself, but to walk the Labyrinth is to find oneself!

Traditionally, although there are countless design possibilities for a Labyrinth, there are two recognised designs, the first is known as the ‘Classical’ design and the other being the ‘Medieval’ design which tends to be more intricate and fancier, tending to represent the complexities of religious faith and understanding!

The ‘Classical’ design is more in keeping with the ancient Pagan tradition and understanding with the elegant curves of the Great Goddess and her connection with the Earth and the natural world.

When we first found the possibility of a site for our Grove, we accepted that although the site was perfect, we would have to manage our expectations and compromise on what would be included.

It was agreed that to give everything the space that was needed, we would have to put the idea of building a Labyrinth on hold as we laid out the Grove and its design, rather than trying to squeeze everything in and cramping the site.

We have been more than happy with the situation, and the Grove and its design have now become a real home, with its layout and flow giving everything the room to breathe and creating its own microclimate.

However, over the last couple of years or so, we have been in discussions over the possibility of extending a part of our border, with the happy news that recently, we were given the go-ahead to expand the size of the site.

As we move forward, we will now be in a position to set out our very own Labyrinth, we are hopeful that with the extra space, our patience will be rewarded and following the Pagan tradition, we aim to include a Labyrinth in the ‘Classical’ style, as an enhancing feature, giving it both the space and respect that it deserves, as an important and welcome addition to our own overall Sunwheel Grove layout!

As a collective we have recently been inspired by a chance discovery at the Rollright Stones and the Whispering Knights Project – www.whisperingknights.org – which includes various forms of Natural Art and a ‘Classical’ Labyrinth, set out within the living woodland. It has reinforced our own thoughts and wishes and also helped to confirm the design for our original plan of including a Labyrinth at the Grove.

We would very much like to share the details of our up-and-coming project, the setting out and hosting of the Labyrinth with submissions, with links to our blog and additions to the page below, hopefully including both text and images of our adventures and experiences!