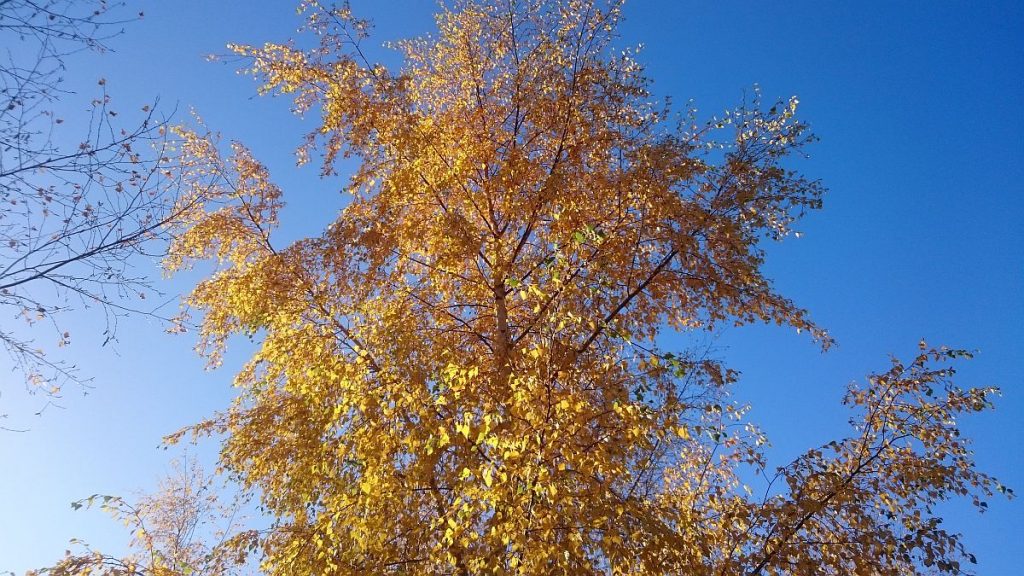 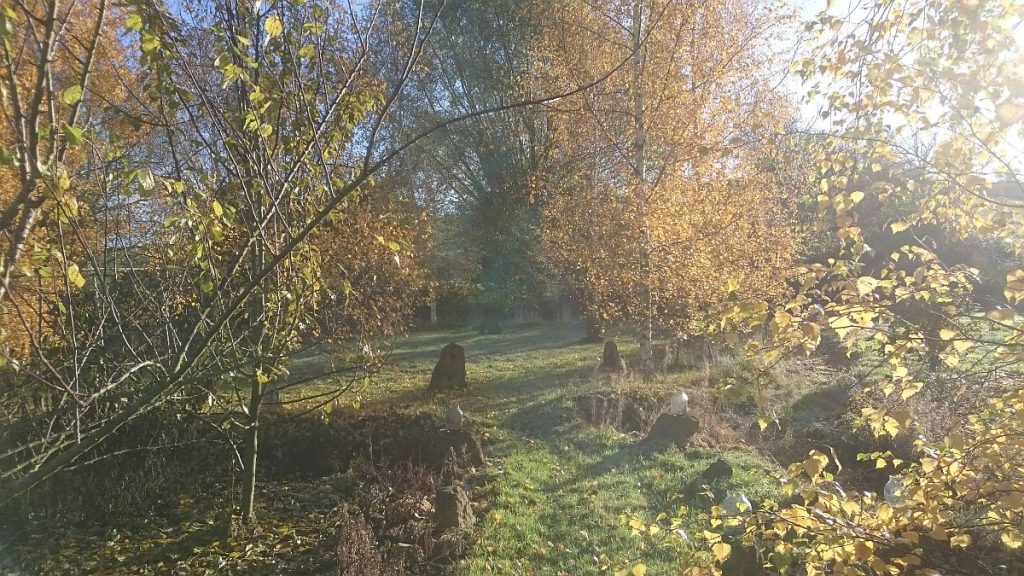 The weep of the Willow bows a morning welcome,
Dripping its leaves in the autumn sun!
The glisten of the dew – freed from the melting frost,
Still crisp in the shadows where the hedgerows run!
The reflective puddles with their blinding shimmer,
Rippled with their seasonal – veil of ice!
The breezes at a standstill – below a vibrant clear blue sky,
Casting a glow of energy that feels so nice!

The running rhythm – of the meandering stream,
Serenading the morning with its trickling flow!
A smattering of Pheasants – wander hither and thither,
Weaving through the fields full of scenery – as they go!
A flock of inquisitive Wood Pigeons take the seasonal tour,
As the fidgeting Crows they Caw their call!
I leave the road – wading through a patchwork carpet of leaves,
Their harlequin colours – lying abandoned where they fall!

Time stands still as I move through the gateway,
Where Robin greets me – as I step inside!
I wander of the pathway to relieve of my backpack,
Notebook in the pocket with a casual slide!
I watch the rays of light – highlighting the dance of the dappling,
Through the Silver Birch and their golden fade!
Sun beams piercing with their strands of threads,
Engulfing the moment – when nature’s magic is made!

With a turn of the circle – I make my way northward,
The sun-wise cycle along Orchard Way!
As I reach of the north – I am disturbed by a rustling,
Captured by intrigue I continue to stray!
At first there’s a Pheasant – in a panic he scrambles,
Taking to the wing from East to West!
There’s more in the Moon Garden – the old stunted Willow in the far corner,
For what happened next – I would never have guessed!

From the crown of the Willow – appeared a waking Fox,
Taking the disturbance as time to withdraw!
With an elegant jump – it found its footing,
Retiring over the rise – toward sunrise – gone as gone before!
The echoes settle and the peace descends,
And I return my attention to the pull of the Trees,
The golden shimmer of a colour cascade,
A kindred palette of autumn pastels – colours by degrees!

A Raven finds its haven at the back of the borders,
A moment to rest and add a voice to the day!
The songbirds weave – the gathering of overtures,
The solo soundtracks of nature at play!
Enter the Planning and Maintenance department,
With their hands of healing and evolution’s eye!
Reaching back into history – the original circles,
Conceived – Planned and mapped – as time’s gone by!

The Samhain Gate structure – is measured and noted,
Loyally dismantled and tidied away!
Hark – there’s the call for second breakfast,
Bathing in the glow – making a plan for the day!
A fire for all seasons – makes its prototype debut,
A promising performance – in a reliable way!
Left to its own devices – burning safe and sound,
A long lived operation holds the elemental sway!

On gathering for lunch – we watch a Red Kite circle,
Over the Grove before it glides to the West!
With an extended ponder – I enjoy my cheese and chutney,
While marmalade sandwiches – serve others best!
With a check on the fire – we gather our thoughts,
So happy just to be in the sun!
The work party scatter to make the final preparations,
For the next job that’s to be done!

We gather together – with the defining of north,
To add a sense of permanence to the Bardic Chair!
Admiring the Lichen on a large seasoned slab,
We start at the beginning – removing the turf that is there!
Matching up the guidelines – tending to the levels,
Laying a fine bed of gravel – to hold our old man-made stone!
Positioned flush – against the Holly bed boarding,
Forming a foundation – a plinth fit for a throne!

The Snowberry bushes – they blush and swell with fruiting,
Hand in hand with Mock Orange – they tip-toe into the shade!
Running around the circle – like a curtain for the Moon Garden,
Through the Clematis archway – history’s spiral made!
Pheasants call in distant voices – in panoramic points in time,
As we contemplate options in the shimmering glow!
Robin picks through the crumbs – as he retreats and returns,
With a flurry of flutters – the picnic bench hosts the show!

Stray lanterns are gathered – in the course of a wandering,
While the Wheat bed framework goes to sleep!
Restored to order in the hands of the professionals,
Left open to the elements and winter’s deep!
As time moves on we contemplate the timetable,
Taking into account the setting of the sun!
There’s a final moment with the fire – before one and all retire,
Not all is lost – as we beat the frost – with another visit done! 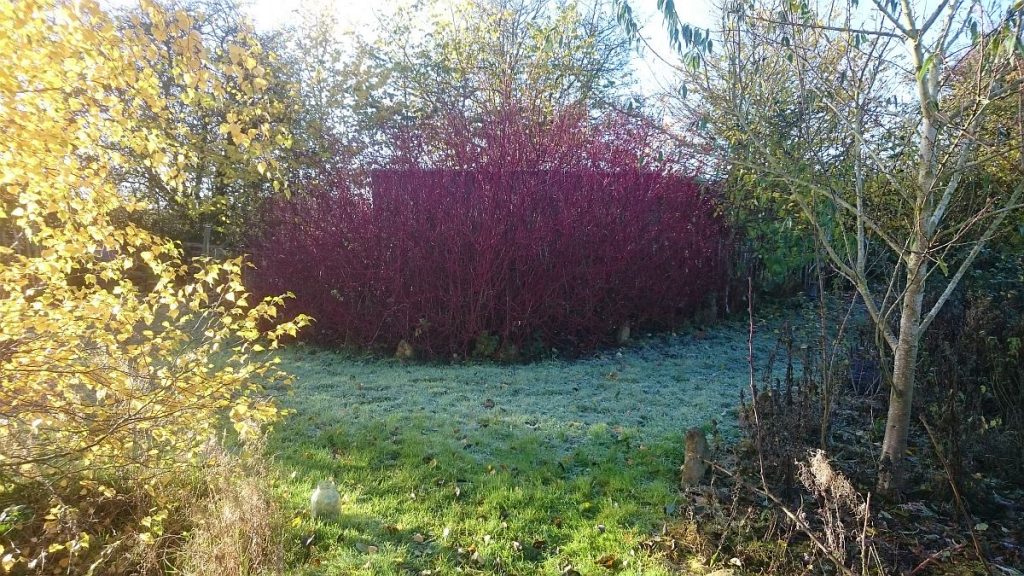 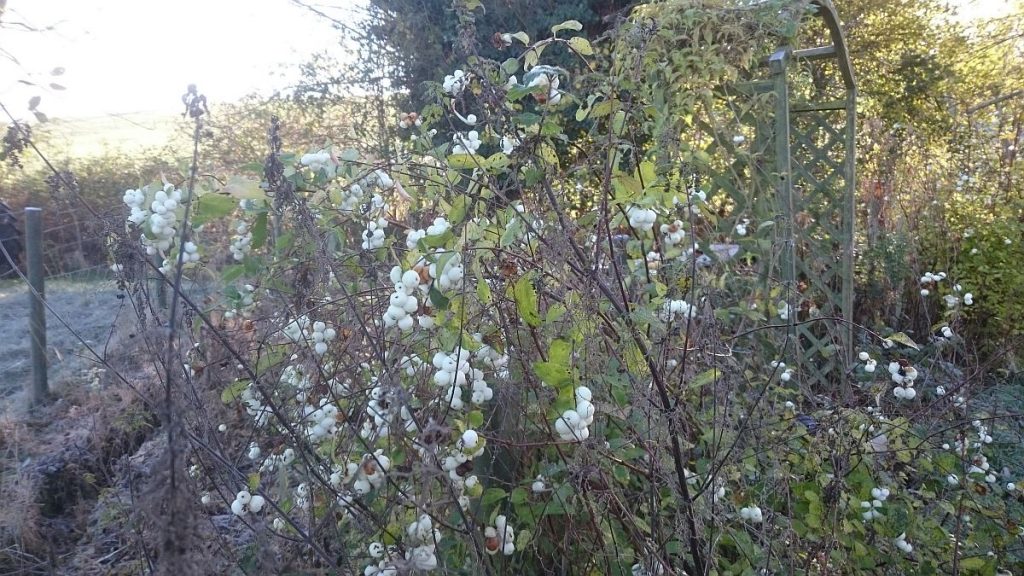