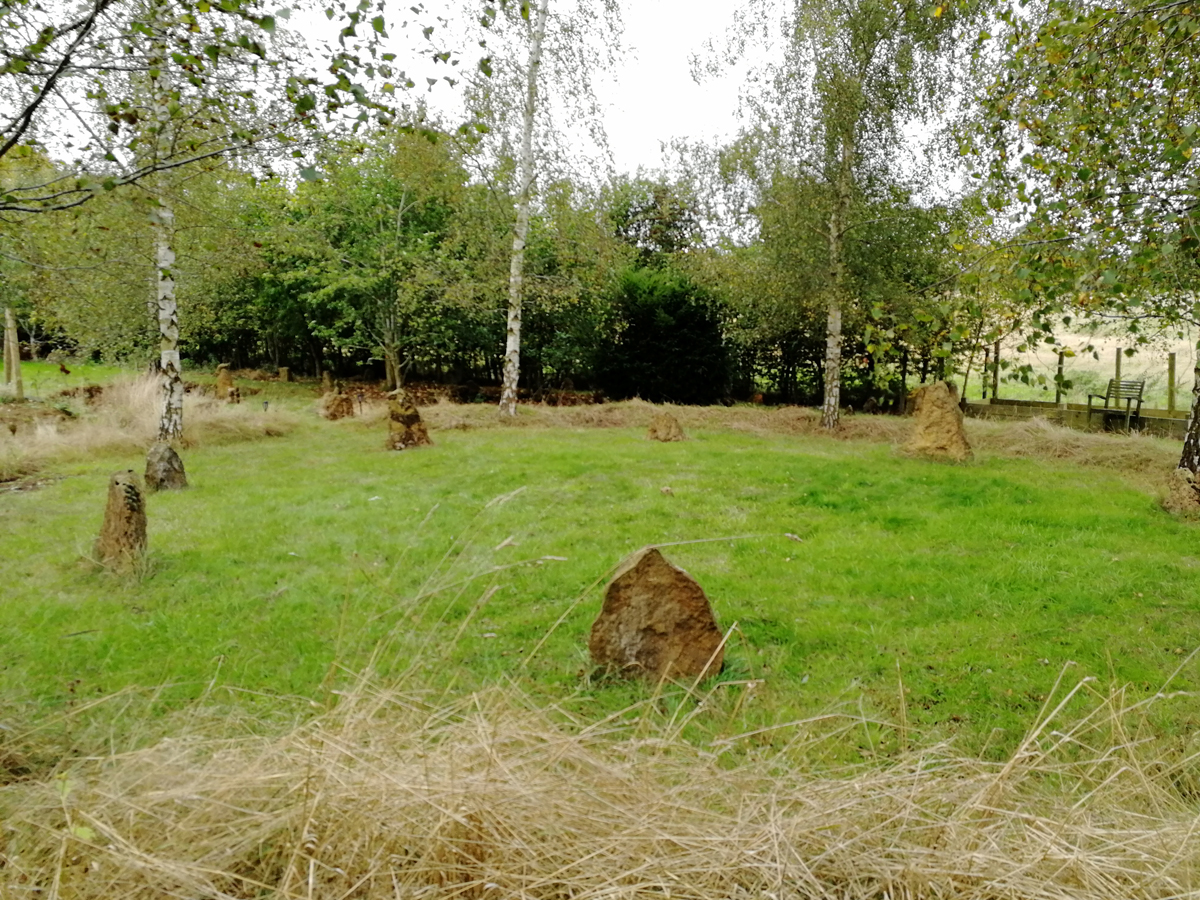 Snatching a view of the forecast – with fingers crossed – there’s an excited smile,
Setting the wheels in motion – a warm glowing emotion – to warm the spirit a while!
Greeting a morning with skies of blue – wispy cloud it moves on through – sailing on the breeze,
With Autumn’s touch – you can feel so much – in the kiss of the seasonal turning of the trees!

Into the adventure of slow release – breathing the air you can taste the peace – glorious is the day,
Familiar landscapes hearing the call – up and down with the rise and fall – affording us the way!
Stepping down onto the grass – we follow our historical trail’s pass – coming to a stop at the door,
Where a journey finds cessation – with a sense of anticipation – as each and every one before!

Disturbing a Pigeon in a tree – taking a flight we cannot see – with the audible beat of its wings,
The Silver Birch how they dance – as the wind strums them by chance – with the melody it brings!
As we calm to a settle – with all in fine fettle – soaking up the sentiment that is offered to share,
The Sun shines with majestic grace – stroking the skin of my wizened face – as I sit upon my chair!

Sitting with my fellow man – conjuring up the day’s plan – with a Dragonfly surveying the scene,
Inspecting the Almond tree – giving it the third degree – before its flash disappears in the green!
With a doodle of sorts conveying the imagination of thoughts – over the bridge of conception’s art,
Working with reflections – the finest selections – where the Moon and the stars play their part!

Like the warming of a hearth – we walk the outer path – admiring the fine detail of seasonal life,
Feeling the security – of the fruit tree maturity – the gifting of nature for the world and his wife!
The Yew put on a show – displaying their blooming glow – filling out the triangular Samhain bed,
Like the foundation of bones – we reach the leaning stones – moving northward – full steam ahead!

In admiration of the lineage of posts – marking out the new boundary like time honoured ghosts,
Like in times of old – when creative dreams and hopes were sold – in the minds of candid hosts!
On to the Moon Garden’s stand – where new visions are planned – bridging the old with the new,
With the Snowberries to stay – along the Mock Orange way – enhancing the path and the view!

With a narrative look – casting an eye – along the line of the brook – all the way south to the Oak,
Past a Willow so strong – where berry laden Hawthorn belong – dressed in its rampant Ivy cloak!
Where Wasps search out flowers – unseen and for hours – the subtle harmony of nature at play,
Next where opportunity rambles – the Butterfly Garden strangled by Brambles – seizing the day!

Nearing full circle – the twisted Hazel resplendent – happy in its homing awaiting Autumn’s fate,
Next to the roundhouse footprint – where evolution leaves its mark – in a constant state!
And the island Altar and its bond – with its incomplete pond – collectively shaped with age,
Well worth a mention – short listed for special attention – placed at the top of priority’s page!

With a real sense of verve – we move to round the curve – following the compass line and its flow,
Adjusting from the north – where we moved it back and forth – picking out the call of the Crow!
We re-gather as a bunch – with the declaration of lunch – returning to the all-weather chairs,
Slowly eating in silent reflection – from a re-cycled Ice Cream tub collection – offering their wears!

In total emersion – thoughts they focus on the Offering Pool conversion – there and then,
Its conceptual history tale a colourful one – where my Son he soaked up the Sun – way back when!
An honouring of chance – in respect of circumstance – saying a thank you to nature’s way,
And so – others have known – where the seed was once sown – as it takes its final form this day!

A new handle for the mattock – secured with a nail – fit for purpose and not to stray,
A start with the impediment – a gathering of old leaves and sediment – stripped back to the clay!
Carving ridges and dips as it suits – around contorted Silver Birch roots – safely underground,
There’s a stone with a face – to keep an eye on the place – positioned to the front of the mound!

A large Dragonfly on a high – on the wind is blown on by – weaving against the tide,
At the mercy of the elements – leading to adventure and hanging on for the ride!
A distant Buzzard shrieks a call – hidden from view beyond one and all – as I note it in my book,
A Wren explores the low undergrowth – sharing in its silent oath – just out to sneak a look!

There’s a casual shower – as we retire under a Hawthorn bower – a shelter in the dry,
Off it soon pops – as it calmy stops – and the sky dilutes its greys as it moves on by!
A curious Hornet at large – like a glowing orange mirage – studying activity close at hand,
I grasp the moment to collect my visions – capturing a record of achievement as I had planned!

Cleared are the roundhouse door post pads – ready to define the floor level – with a concrete plan,
The work of the architect – a will of the circumspect – with the perfectionist in the man!
Announcing its arrival – the call of the Magpie – slows for a fly by – taking in the sights,
It’s like a signal to the resident Crows – as it comes and goes – and it’s quite within its rights!

And so – we find – a little peace of mind – sharing our final thoughts and hypothetical plans,
Hidden under the canopy – putting the world to rights for free – like dedicated fans!
From left to right a pair of Buzzards bustle overhead and flexing muscle – in rain affected flight!
Giving us the full flavour – a solo returns the directional favour – with a call that’s piecing bright!

With the tools locked away – we are done for the day – encountering corners that enclose in time,
Bouncing ideas at random pace – supposing a clearing making space – and now to make it rhyme!
A myriad of mystery – looking back into history – pushing back the boundaries we hold so dear,
It’s all food for thought – is the future’s retort – lost in reflection – as we quietly disappear!