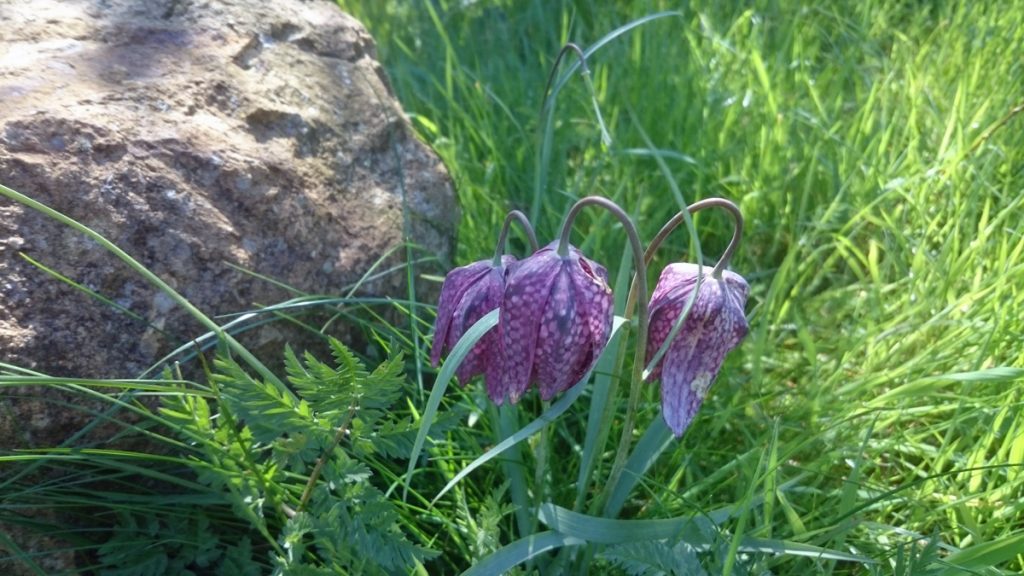 The Fruit trees blossom and I join my path – as the breeze picks up with the chills,
The sunlight pinpricks through the grey of patchy clouds – in highlights across the hills!
The songbirds warble and chirp their chorus – a pair of pheasants edging the field in the grass,
Rabbit zig-zags its way through the undergrowth – along the dry ditch underpass!

2 young Lambs skirt the field of their breakaway morning – strolling on the near side of the hedge,
As I watch from afar – the end of an adventure – slipping back under the gate at the fields edge!
There’s the mumbling of Partridges behind the Hawthorn row – as it wanders round the bend,
I sneak a peek over the top – at their camouflage huddles – before my journey meets its end!

Entering the gateway Crows and Doves disperse – greeted by the abundance of new green leaves,
A pair of Partridges tip-toe around the bed of Yew – its triangular form as they bob and weave!
Shy and discrete they assess fight or flight – against a backdrop of springtime oh so still,
As if in agreement they take to the wing – over the fence to the north with determined will!

In its infancy the blossoms of Apple and Pear – the Cherry steals a march upon season’s turn,
The Greengage Tree – slowly dressing with flowers and leaves – with the Almond quick to learn!
The Bluebells are open along with forget-me-nots – with the Primroses they bloom in the sun,
Foxgloves in the green start to make their move – with their flowering year begun!

Daffodils and Snowbells wave their heads for attention – as the Bees they do the rounds,
Historic Snakes Head Fritillaries – decide to put in an appearance – amidst the sights and sounds!
Dead-nettle wildflowers alive with the Bumbles – gathered in swathes across the orchard floor,
Around the Beltane Stone we welcome the Cowslips – who could ask for anything more!

The sky is now empty – a beautiful vibrant blue – a contented Buzzard gives a distant call,
We add a flame to the fire-pit and watch it grow – a south westerly wind drives smoke and all!
The wheat bed it bristles with the early shoots – where Emmer feels the warmth of the earth,
The seeds of the equinox – they chit and push for the light – following the sun-wheel of their birth!

With a pause for assessment we break our fast – in the glory of the spring day sun,
The plant pen is calling with the voice of the Trees – and we know what must be done!
With an airing of tension we unlock the shed – expecting Blackbird alarms as we did last year,
With the turn of the key and the suspicion of silence – where all did not concur!

The nest in the corner still holding its eggshells – beaten and broken and pushed from without,
Intrigue casts a vision around the rest of the shed – and there is mystery there’s no doubt!
In the bottom far right corner – a big cluster of feathers – formerly a Partridges Sunday best,
Dry to the touch and free of skin and bone – where the bird was clearly dressed!

Up upon the shelf in the far left corner – behind the medical box there’s a similar sight,
This time it’s smaller – the remains of a Blackbird – a mass of feathers wrapped so tight!
No war wounds in evidence or their brutal colours – to echo of their fate,
While people are away – then nature will play – the life of survival on a plate!

With closer inspection and in the dry clay floor – a small hole descends to down below,
Where an old Rabbit Warren runs under the shed – with tunnels to and fro!
There’s a gap under the door – exploited by Blackbirds – with an access to the Grove,
Like a holiday island that’s open to plunder – when you’re out upon the rove!

We believe the visitor comes dressed as a Stoat – when given all the signs,
Some distant years ago – before I started my blog – I go back in distant rhymes!
I was sat at the bench in the southern corner – in a ponder at the time,
Down along the entrance path came the bobbing of a tail – a moment most sublime!

Expecting a Squirrel from behind the Dogwoods – there was a flash of orange-brown and white,
I sat as it bounded – along the stumpery of the Butterfly Garden – strangely out of sight!
Suddenly it stopped as it reached my end – in the sense that I was there,
Three feet away – on an unbelievable day – a fleeting moment for us to share!

We returned each-others gaze – for what felt like days – casual but sacred with neither a move,
As the moment prolonged I gently reached for my camera – for the need to want to prove!
Filling up the frame on the horizontal – the button did nothing and failed in its task,
No record was taken but I savour the memory – and that is all that I would ask!

As if with a laugh it ambled away – into the undergrowth and on its way,
With each passing visit – I looked for its presence – but never again since that special day!
Typically I was able to capture the moment in hindsight – so I could see where it had come to rest,
With the Grove comes its wildlife and all so diverse – our hearts are truly blessed!

So on with the day – with a close of the door – tucking in the edges of the fire,
Down to the Moon Garden the far side of its ditch – on the near side of the wire!
Glentaowen the planter with his loving care – a new Goat Willow behind the crescent of the moon,
Three then four of our grown on Alders – planted adjacent in the Moon Garden cacoon!

The discovery roots are earthed and stoned – protection from diggers coming time and again,
We follow the pathway and out through the gateway – to where the Elders still remain!
In a triad of standing with the last three Alders – shading a shelter where nobody knows,
Then retiring within and admiring the Honeysuckle – happily thriving as it grows!

With the clouding of the skies – we share goodbyes – and the fire dies down to ash,
With the return of the chills – we head for the hills – raising our hoods to the winds that gnash!
The songbirds bring a harmony to ending our day – as we leave the Grove in peace,
What a treat for a birthday and sharing a smile – with the wonder of release! 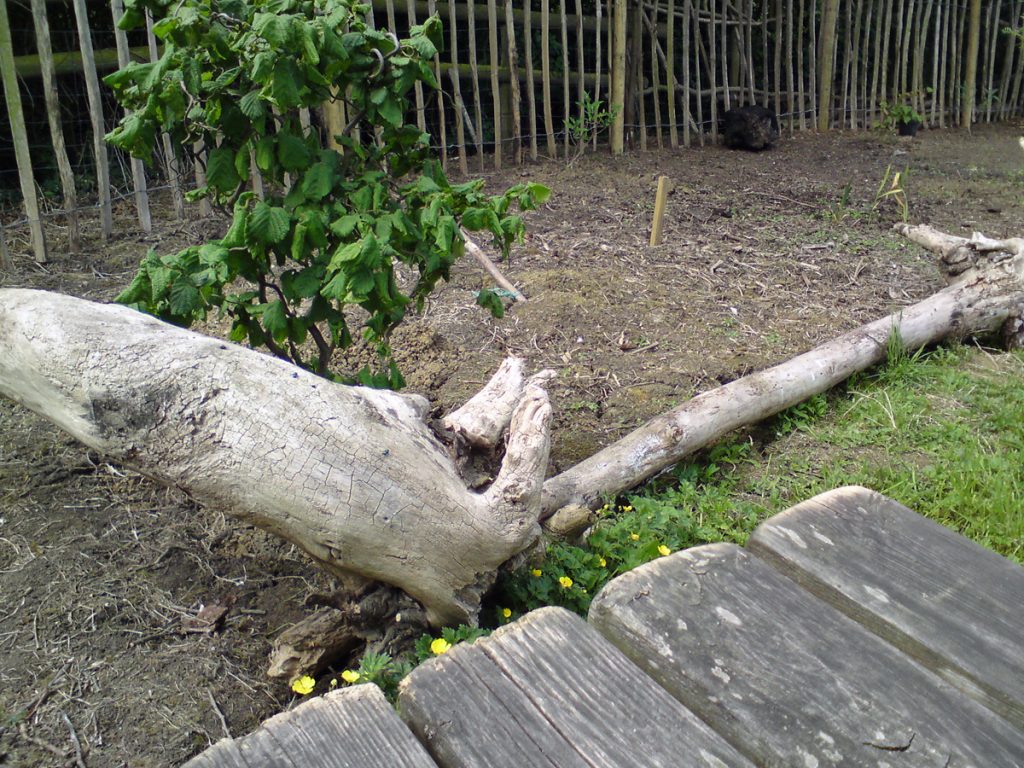