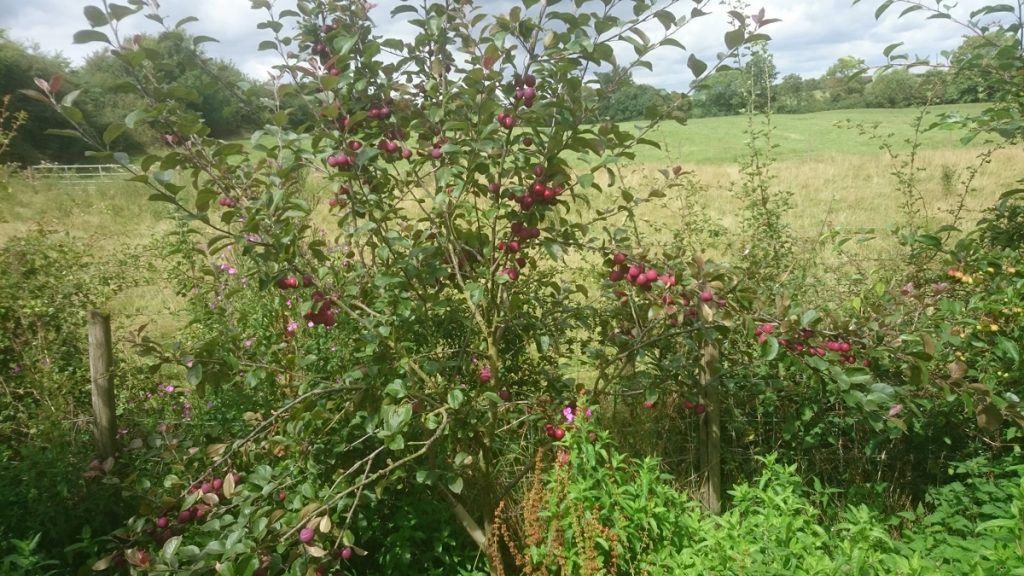 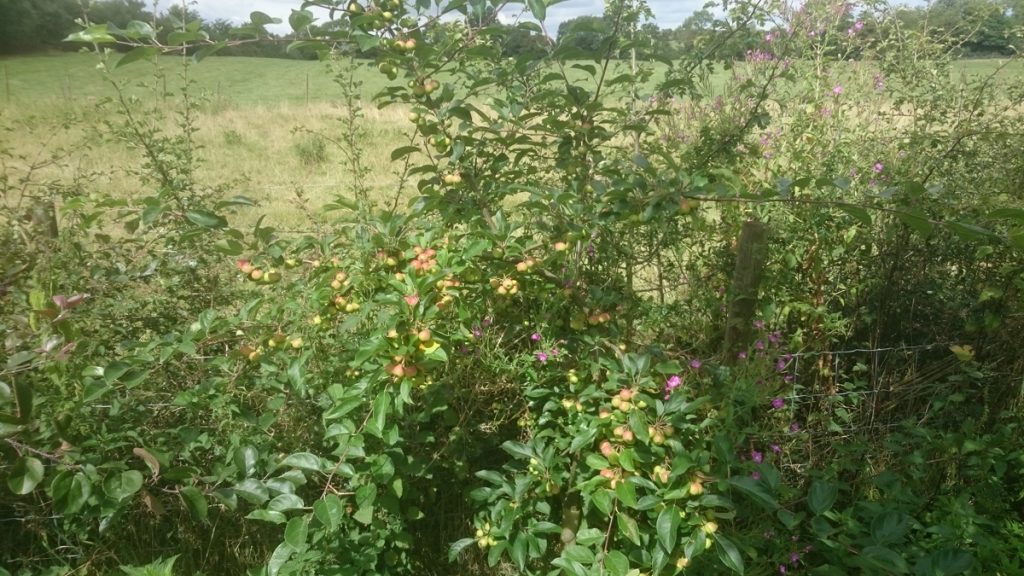 Overly dressed – in a many layered swaddle – greeted in the mid-morning sun,
Wearing the weary – with the usual lack of sleep – I linger in silence the deliverance run!
Anticipation’s arrival – leads the winding pathway – covering the gateway in shade,
With a scurry of an entrance – relaying supplies – closing the gate a connection is made!

Wading through droplets – sheltered in ankle deep grasses – on the roundhouse trail and beyond,
Unloading the backpack at the old picnic bench – where the Butterfly Garden and gallery bond!
Breathing in the moment – it conjures a smile – contentment settles with a slow release,
With the warmth of welcome – inviting the peeling of layers – in a relaxing pool of peace!

The Earth’s Discovery leaning – laden with apples – in a bow to the southern Oak,
The Orchard swells – with its abundant clusters – tucked under their leafing cloak!
The Squirrels leave the debris – of Almond Tree sorties – dotted around the edging stones,
Nut shell fragments – left in random patterns – seconds are singing in multiple tones!

Enter the Emperor – the King of the Dragonflies – moving in circles on the delicate wing,
Scouring the Dogwood – with its buffet of insects – it’s a truly – many splendored thing!
The Wasps and Bees – they network the trees – checking out the fruit with the Flies,
A blanket of cloud – drapes a shaded shroud – before the sun climbs the highest of skies!

Camouflage Butterflies – weaving in their flutter-bys – pausing at the pink and white Clover,
Random are the Whites – that flitter in their flights – rambling around like a rover!
The Finches fidget – in their raiding parties – twittering excitedly while out on the move,
A Red Admiral comes to rest – at the sun triangle pinnacle – chilling in the groove!

Second breakfast descends – with the gathering of friends – around the picnic bench in the sun,
The breeze it comes and goes – with its casual blows – sharing in the fun!
The Swallows swoop – in their sparse numbered group – weaving performance lost in time,
With a preview of our wording – we echo the threads of sentiment – compulsion is to rhyme!

The Doves and Wood Pigeons – scatter in the margins – a ring of admiration starts its flow,
The Orchard display – with its fruit on the way – the best of cropping we are yet to know!
The Plum and the Pears – covered in their wares – even the ‘Beth’ with its first year’s show,
The Greengage magnificent – with its elegant smattering – the seasons busy in its swelling grow!

The Ornamental Crab Apple – a heavyweight tangle – with its veil of wine red fruit,
Next to its kindred partner – a subtle yellow with a dusting of pink – free-form as to suit!
The entrance Russet and the mystery Apple – form less fruit in the Dogwood shade,
With the first Dogwood harvest – come the depths of Winter – lighting changes will be made!

Thriving on its pedestal perch – the solo Silver Birch – stands atop of the Ancestral mound,
The eight Silver Birch do their thing – where the harmonies sing – standing proud in the round!
Their fungal companion – quietly raising Toad-Stool heads – a precursor to a collection of rings,
A gathering pre-arranged with the damp of the Autumn – where the mist of the fall it clings!

Twin Discoveries mark a future archway – hanging heavy with red Apples glinting in the sun,
With the force of nature it requires attention – the ‘Planning Department’ will see it done!
The Yew and the Elders – fulfilling a Samhain backdrop – keeping a time with the Oath,
Running through the character of Orchard Way – with a sheltered wall of growth!

The Wild Cherries – they lost their blossom early – as their lack of fruit concedes,
Lizzie’s Cox’s Orange Pippin – snuggles with the Hawthorn – where its fruiting slow recedes!
The Hawthorn hedging – has grown though sun-wheel cycles – enclosing the Grove to the eye,
The Holly Bed framework – awaits its final boarding – having been fixed and left to dry!

The Moon Garden Goat Willow – flourishes in the corner – accompanied by the twisted Willow,
From a whip through the years reaching strong and tall – we’ve seen it forming a natural billow!
The Ornamental Rowan behind the Imbolc Stone – one of the first trees planted at the Grove,
Has transformed with the ages with its rooting deep – a fixed point of reference the future wove!

The Snowberries form and plump their snow balls – over-spilling onto the passing trail,
The Mock Orange masses – await their pruning classes – separation and spacing the fine detail!
Clematis tendrils march – over the entrance arch – in need of support against the breeze,
The Moon Garden backed with Alder saplings – under the shade of the Willow Trees!

The Hawthorn ending stands reborn – recovering a scalping to shape the hedge,
The energy of the Willow escorts us to the Beltane Hawthorn – where the ditch it skirts its edge!
On through the Stones – we enter the gallery – where the St John’s Wort it sits in the corner,
The Butterfly Garden – it tires in the sunshine – capturing the attention of the flora and fauna!

The Southern Oak standing furthest South – an established rootstock with its virgin leaders,
The dog eared leaves of the twisted Hazel – sharing tales of its travels with my regular readers!
The Hazel clumps – have come up trumps – early in the forming of their seasonal fayre,
Guests of honour welcoming the ‘Season of the Hazel’ – on this Lughnasadh gathering we all share!

Preparations begin – when the Lanterns move in – all of a flicker the entrance candles glow,
Dressed in order sun-wise – we lay the table – the altar sun-wheel table-cloth – swinging low!
The shell wind chimes – they ring with the times – dancing a symphony strummed by the breeze,
With the flavouring of incense – inter-mingling in swirls – amongst the circle of the trees!

Earthen coloured Dragonflies out on manoeuvres – joining the gathering at the roundhouse door,
A notion of a motion sparks the old Sun Lantern – taking up the trail as we have done before!
A repeated chime it leads a melody – weaving round the corners and circling rings,
The rhythm of life it echoes – finding firm its grounding – engulfing the heart as it sings!

We honour the Harvest with a toast to the Ancestors – with wheat bed threads of gold,
There’s a ceremonial Harvest with a trusted sickle – beheading a wheat crop to behold!
We swill down a seed with a mug of Ale – a fermented brew from last year’s grain,
Honouring the bed – we break our bread – consumed in contemplation with the ancestral chain!

Distribution follows – with each in turn – the directions covered – each and every one,
The Hazel honoured – as we teach so we learn – basking in the heat of the Sun!
As a small Wasp finds the Mead – with a will to succeed – we come about to the close,
Flagrant smiles – reach for miles and miles – a contented retreat where the passion flows!

We return to catch the back stroke action – a larger Wasp it swims the Mead,
The lifeguard swift and springs to action – drained and rescued guaranteed!
A Raven calls – attracting spotters – lost in the cover on the far side of the Willow Tree,
Its happy to chat – as we restore the Grove – and we leave the Raven be!

As a farewell parting it circles the rise – cronking and honking its last goodbyes,
The Sun peeps bright from behind a fluff of cloud – and the Raven is off to roam the skies!
We watch Butterflies ramble – Wasps and Bees take their gamble – as we retire through the gate,
There’s an unplanned sacrifice – as the Mead hits the road – with a smash that wasn’t great! 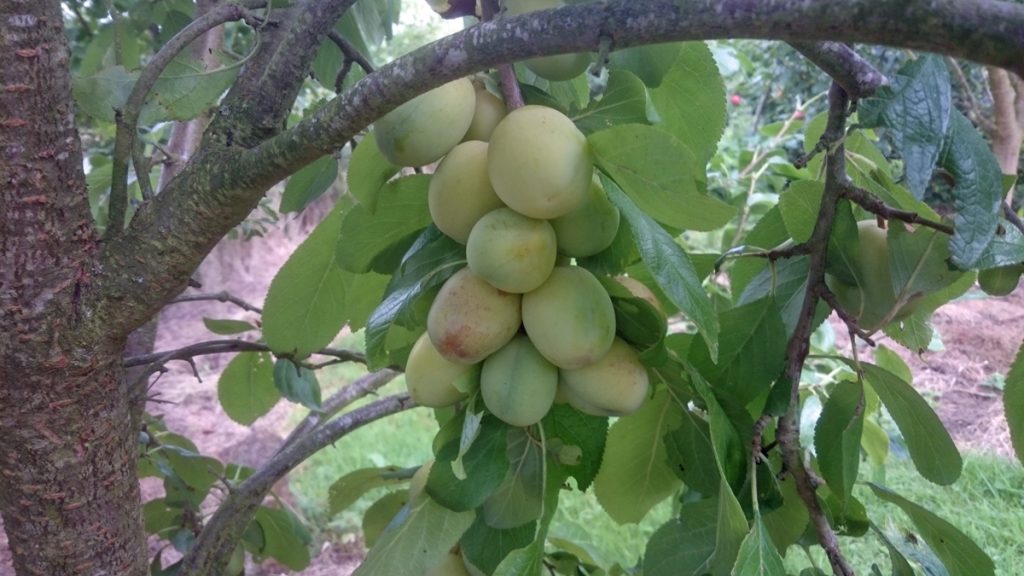